Prestwold Hall was for many years the seat of the Packe family. Before that time, it was the home of the Skipwith family. After the death of Major Robert Christopher Packe (born c.1783), one time Aide-de-camp to King George III, killed during the Battle of Waterloo, the hall passed to his nephew George Hussey Packe who held the hall and estate until his death in 1874

The hall was remodelled by architect William Burn in 1842–1844, incorporating the fabric of a mid-18th-century H-plan house. It was Grade I listed in 1951

Near the house stands the Grade II* listed church of St Andrew, a medieval parish church largely rebuilt in 1890 by the architect Sir A Blomfield. It is all that remains of the medieval village of Prestwold, which was demolished during the enclosure of the estate.
As well as the Primary schools National final the grounds are used to host the country’s biggest primary schools xc league as well as the Midlands Xc and is booked already for 2017 – 2020 to host the Inter Counties and British World trials cross country.
For more information about the venue visit www.prestwold-hall.com/ 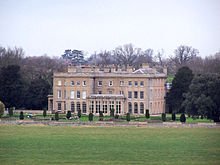